‘You need to increase your visibility – It will pay off!’ That is the command I heard year after year when working as an engineer and a management consultant at a large consulting firm. I never understood what it meant.

Was I supposed to go out there and raise my voice at every meeting or put the spotlight on my accomplishments? Should I wear different clothing or change my appearance?

Now, ten years later, I still struggle with the term ‘visibility’. Being an entrepreneur and the Chairwoman of PWN, I now have an idea of what visibility means, what is does, and the responsibility that comes along with it.

Let’s start at the beginning: I am the only girl in a family of four, my parents always encouraged us to excel in education and life, so as a child I could be found in the library, reading books, two each week. As I grew, I decided to study computer science, a field in which  I could think, connect the dots, solve problems and, yes, be independent. I am an introvert. I do not like to be the centre of attention, and I hate it when the spotlight is shining brightly on me.

Now, however, it very much does shine on me. And that is okay.

Becoming an entrepreneur placed me right in the spotlight and increased my visibility in the area of endurance sports. When I became president of PWN, that spotlight became that much brighter and my visibility as president thus increased, which is something I only realised in the last couple of months; That with gaining the title, a part of my visibility would increase along with it. This title puts me centre stage as the president PWN, not as Sheila ( there is a difference). Being president has opened doors for me, especially on the theme of gender equality and empowerment. My professional network is growing and diversifying which not only contributes to the expansion of PWN but is also helping develop my own view on society and of the world.

When I am addressing an audience as president of PWN or director of the Cycling Academy, I always try to work with the energy that’s in the room. I feel quite relaxed in front of a crowd.That is not something that comes naturally for an introvert but is the result of many hours of practice. For the last five to six years I have been working weekly with large audiences for three-hour sessions. I have had to connect, present, educate, interact and entertain people. As a result, I know my weak points, I know how to deal with my insecurities, how to take harsh criticism and I know how to build on the energy that is already in the audience. Also, I realise that people not only want to hear the content but also want to feel connected to the person presenting it. So tap into your own energy, breathe, and see yourself as the instrument delivering the message, where the impact of the message is determined the messenger.

As an introvert, this is always hard work, and I need my down time to regenerate. At the beginning of my career as PWN president, I struggled to connect with the language. English is my second language and my Dutch-thinking brain works fast, even for Dutch people. Know I have to translate my Dutch thoughts into English words in a nanosecond, that is hard work. However, practice helps a lot with that.

When your visibility grows with the attaining of a title, it brings with it some responsibilities. In my opinion, you have to be fully aware of who and what you are representing and of the image you are creating of yourself and the company or initiative you are representing. In my opinion, preparation is therefore key. Know what you are going to say and keep your calm in exciting and nerve-wracking situations. And I don’t just mean in personal settings, also think about your posts on social media – what could they say about you? And is it in line with the image you want to cultivate? Visibility is necessary to get things done and they way you are visible both inside and outside your network determines a great deal of your success.

So, what does being visible mean from my point of view?

So yes, being visible as PWN President is something I enjoy and consider very important for the network, both in The Netherlands and internationally. Moreover, it comes along with quite some responsibilities, insecurities and opportunities. However, remember to be visible for a cause; your cause. Be passionate for the greater good; then visibility, and respect comes your way naturally. 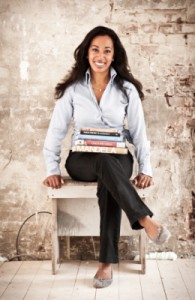 Founder of the Cycling Academy, a training institute for endurance athletes, trainers and coaches, Sheila is an engineer, working as an executive coach.  She gained her experience in the financial sector before moving into coaching and recruiting technical professionals in leadership and communications skills. Sheila is the president of PWN Amsterdam and VP Network Strategy for PWN Global. She lives with her partner and four children in Amsterdam, The Netherlands

Blog Reprinted with permission from Sheila Gemin.  To view the original article here.